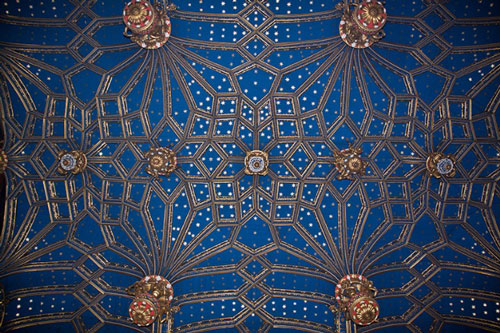 De Montfort University for generously supporting the project with a grant from the Higher Education Innovation Fund (HEIF).

Eric Tatham, Mixed Reality Ltd., for building the computer models, and for being ever patient, enthusiastic, and accommodating of change.

Julian Bowsher, director of the Rose playhouse excavation in 1989, and Pat Miller, both of Museum of London Archaeology (MOLA) and joint authors of the final excavation report, The Rose and the Globe: Playhouses of Shakespeare’s Bankside, Southwark: Excavations 1988–90 (Museum of London Archaeology: Monograph 48, 2009), for so generously sharing their research and knowledge of the Rose playhouse archaeology, and their willingness to don a VR headset to explore and pass comment on the model in development. We are extremely grateful to the authors for allowing us to draw so extensively on their work here; and to Julian for his time and willingness to explain ideas, respond to questions, for reading and offering improvements to drafts of this document, and for steering us away from blunder.

Sarah Jones, Head of Geomatics at MOLA, for advice on the CAD models and geo-spatial data for the Rose playhouse site, and offering her opinion on the model by virtually exploring it in development.

David Bowsher, Director of Research at MOLA, for supporting the project.

Jon Greenfield, Director of Architecture at Barron and Smith and project architect during the reconstruction of Shakespeare’s Globe and Sam Wanamaker Playhouse, for sharing his research on and opinions of the architectural construction of the Rose playhouse, and willingness to give up his time to explain ideas, respond to questions, and offer his guidance on the model.

Gabriel Egan, Professor of Shakespeare Studies in the School of Humanities at De Montfort University, for his support of and guidance on the project, for reading and offering improvements to drafts of this document, as well as his willingness to be strapped into a VR headset and to offer his opinions on the 3D model as it developed, and whose own research into Tudor playhouses has fed our ideas.

Siobhan Keenan, Professor of Shakespeare and Renaissance Literature in the School of Humanities at De Montfort University and co-author (with Peter Davidson) of ‘The Iconography of the Globe’ in Shakespeare’s Globe Rebuilt, eds. Ronnie Mulryne and Margaret Shewring (Cambridge: Cambridge University Press, 1997), for advice on the potential interior decoration of Southbank’s Tudor playhouses.

Andrew Gurr, Professor Emeritus at the University of Reading, former Director of Research at the Globe and Trustee of the Rose Theatre, for offering his opinion on the model as it developed and whose own research on the Rose playhouse has fed our ideas.

Maurice Hindle, co-creator along with Gabriel Egan and Andrew Gurr of the Shakespearean London Theatres (ShaLT) project and Trustee of The Rose Theatre, for generously offering his opinions on the research behind and development of the model for Phase II.

Simon Blatherwick, Archaeological & Historic Environment Director at RPS Group, site manager, and archaeologist for the excavation of the Rose playhouse, for offering his opinion on the VR model in development.

Mark Hutchings, University of Reading, for sharing his ideas relating to the stage trap at the Rose.

Dan Nesbitt, Curatorial Assistant at the London Archaeological Archive and Research Centre (LAARC), for assisting with access to, and his knowledge of, the Rose Theatre archive (site ref. SBH88).

Harvey Sheldon, Chair of The Rose Theatre Trust, for the foreword, and the Board of Trustees for encouraging the project to go ahead and for their continued support . Also to Pepe Pryke, former Honorary Artistic Associate at The Rose Playhouse, for his involvement.

Chris Stone, an undergraduate student at De Montfort University, for helping with a pilot model of the Rose playhouse as part of his final-year project in Game Art Design.

Christopher Howitt, a postgraduate Drama Studies student at De Montfort University, for narrating the video of the model.

Lucie Skeaping and the City Waites for generously allowing use of their music.

Thanks also to the following libraries and archives for their support for the project and for generously allowing use of their archive materials: