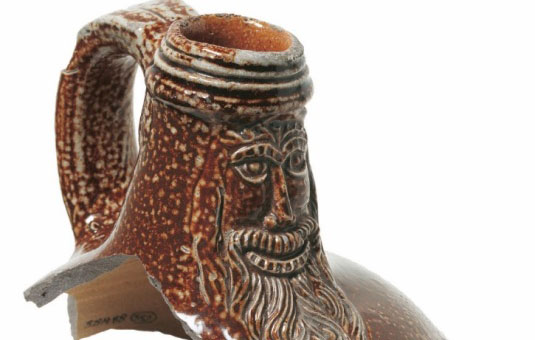 Fragment of a Frenchen Bartmann jug

There are a number of references to the consumption of food stuffs in the open playhouse in plays of the time: in Wit Without Money (1639 [1614]), John Fletcher has a character describe youths who ‘cracke nuts with Schollers in penny Roomes agen, and fight for Apples’;400 a ‘Puny Clerk,’ in Sir Thomas Overbury’s Characters (1615), ‘eates ginger bread at a play-house;’ 401 and in his prologue to the collection A Fancies Theatre (1640), John Tatham refers to the throwing of pears at the curtains by spectators to lure out the players at the open playhouses.402

Bowsher and Miller record that common foodstuffs found at the Rose site were:

References to the consumption of drink at the playhouses refer to water or bottled ale. In a letter dated 2 July 1613, Sir Henry Wotton records his account of a fire at the first Globe in which ‘one man had his breeches set on fire, that would perhaps have broyled him, if he had not by the benefit of a provident wit, put it out with a bottle of ale.’404 In 1615, the writer John Stephens includes among the features of his character ‘a base Mercenary poet’ that ‘when he hears his play hissed, hee would rather thinke bottle Ale is opening.’405

Bowsher and Miller record: ‘Of the identifiable ceramic vessels from the Rose playhouse, 38% were drinking vessels. Of these, 16% were used for serving drink—for example, jugs, Bartmann jugs (fig. 112), flasks, and costrels. The remaining 22% were used for consumption and these included drinking jugs, tygs (fig. 113), tankards, mugs, and goblets. None of these vessels were of high status … found throughout the building … [with] a respectable number below the galleries.’406

Fig. 112: (left) The fragment of a Frenchen Bartmann jug fund at the site of the Rose playhouse © MOLA; (right) A similar jug.

Glass vessel fragments came mostly from the Rose playhouse and included jars and bottles as well as drinking glasses such as beakers and goblets. Bowsher and Miller note that ‘[c]ontrary to the ceramic drinking vessels, many of the glass ones are quite high-status pieces.’407

In the model, samples of such food and drink have been laid out on the stall outside Cholmley’s victualling house reader for sale to playgoers making their way into the playhouse.