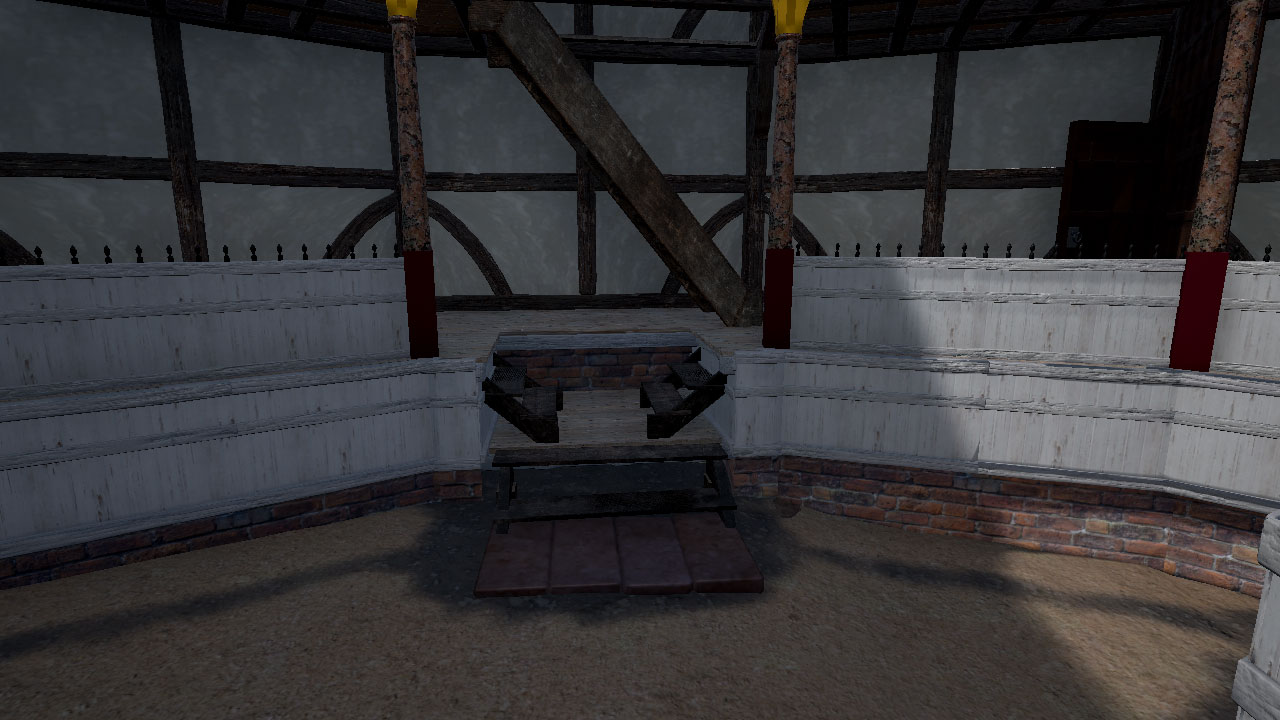 The ingress from the yard into the lower gallery, with access to the upper galleries via an internal staircase

The structure that allowed patrons to move from the yard into the lower gallery and to gain further access to the upper galleries isn’t clear.

The sketch of the Swan playhouse (fig. 37) shows an entrance De Witt called the ‘ingressus,’ from the yard inset into the lower gallery.

Features in the archaeology (fig. 38) appear in the same location at the Rose playhouse, and may or may not be related to an ‘ingressus,’ or entrance to the lower galleries, as pictured at the Swan. Greenfield clearly thinks not given such an ingress is absent from his architectural drawings of what the internal layout of the Rose may have looked like (see fig. 35 [4.5.1]).95

The angle between bays 4 and 5, the centre point of the building, is uniquely marked by brick foundations, presumably needed to support a heavier area of the superstructure. A pair of parallel brick walls within bay 4 (1.47m apart; marked in blue) and perpendicular to the outer wall (in orange) and clearly intended to extend to the inner wall (in green) relates to this strengthening. Bowsher conjectures that this was probably an entranceway to the galleries, via a threshold, which may have supported steps. He suggests that there was probably a similar feature on the opposite side, although this eastern section of the playhouse remains unexcavated.96 Lying in the yard adjacent to the walls was a stone conglomeration, including a block of Purbeck marble. The stone slab showed obvious signs of wear from feet having passed over it, suggesting it was more than just a foundation for the steps.

It may be presumed that there were at least steps up from the yard into the galleries. It is not known if the drawing on the back of a letter from Philip Henslowe to Edward Alleyn (also by Henslowe?) (fig. 39) pertains to the Rose playhouse or is a design for a theatre ‘ingressus.’ The intriguing inscription beside it, perhaps unrelated, reads ‘embroydered carpet.’ There appear also to be three bars across the entrance, perhaps designed to prevent access.

Bowsher’s preference is for the ingress steps to be ‘inside’ the gallery, as shown in the model; however, he points out that there were short walls ‘outside’ in the yard at the archaeological remains of the Globe playhouse, which might—in the absence of any other ideas—have been associated with ingressi.98 It is possible that steps up to the lowest gallery at the Rose projected from the gallery frame into the yard (fig. 40), although no supporting structures were found in the archaeology and which would have reduced the capacity for paying playgoers standing in the yard.

Signs of wear from footfall on the marble slab suggests it wasn’t simply a foundation for steps built ‘outside’ the gallery, which would anyway have protruded inconveniently into the yard.

As for the design of the steps themselves, the model assumes that the staircases leading up to the first-floor gallery were placed in the same bay as the ingressus so as not to take up spectator space from another bay. The only logical way to design steps to allow this is as shown; perhaps a little over engineered (comments Greenfield), they echo the image on the back of Henslowe’s letter to Alleyn.

In his design for the Rose, Greenfield dispenses with access from the yard into the lower gallery altogether, which fits with his early hypothesis with Gurr that the playhouse may have begun as dual purpose and been used for animal baiting.99

[96] Bowsher, The Rose Theatre, 38; Bowsher and Miller, The Rose and the Globe, 45. Bowsher notes that this cannot have been an exterior entrance or ‘egressus’ (exit) since the walls abut the outer wall on both sides.

[97] Dulwich College archive label the drawing ‘of a stage.’

4.5.2 Main entrance to the playhouse

4.5.2 Main entrance to the
playhouse