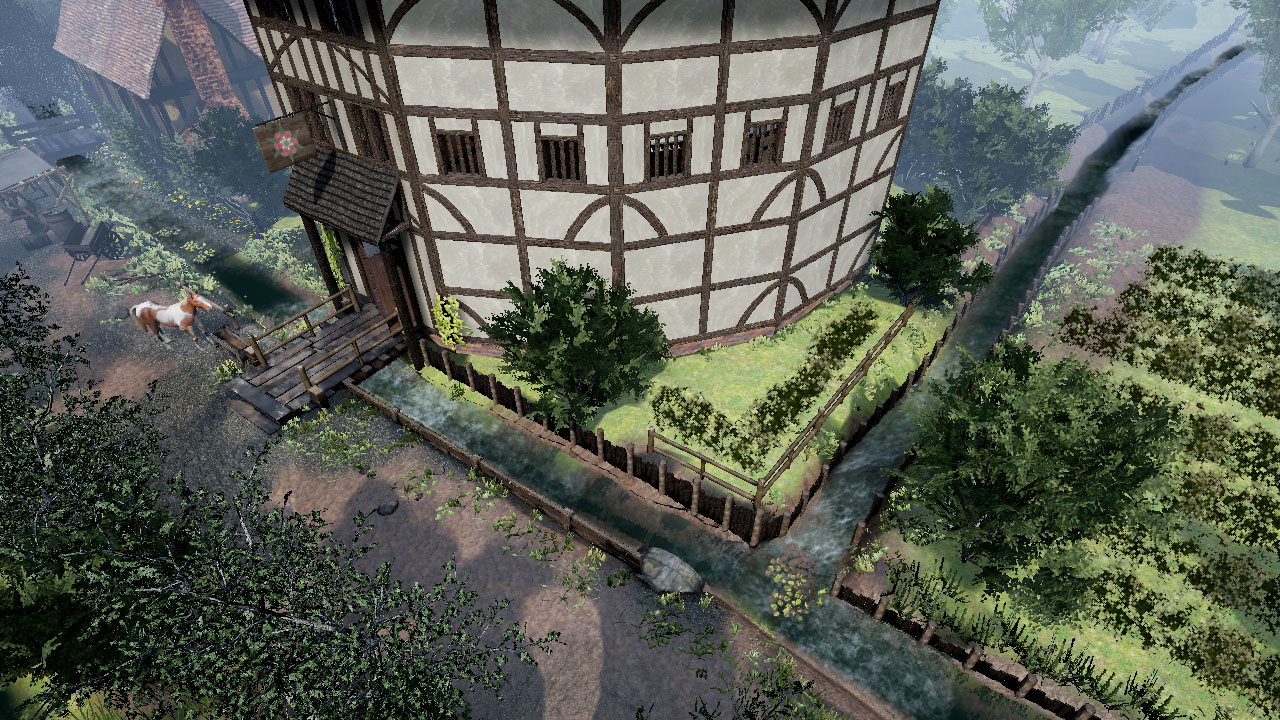 The low-lying land to the south of the river Thames on which the playhouse was built was prone to flooding. To the east of the playhouse, Norden depicts sewer ditches (that is, drainage ditches or water channels, not the modern meaning involving waste), running north, along what is Rose Alley, and along the northern and southern edges of Maiden Lane, the road that runs east-west below the playhouse.29 Excavation of the plot in 1989 revealed sewer ditches running to the north, south, east, and west of the playhouse (fig. 9, shown in blue). More than subdividing the Rose estate, these formed parts of the water drainage channels from the low-lying land and, perhaps, drainage from the playhouse. The southernmost bay of the Rose was built right up against the southern sewer ditch, which Sewer Commission records show to have existed since at least 1564.30

The boundary ditch to the north was perhaps dug as part of the development of the playhouse, rather than as a sewer, helping to separate the southernmost plot from therest of the Rose estate.32 Excavations of the site in 1989 showed that the ditch was broken in the centre by a gravelled/cobbled surface comprising a layer of flint pebbles (average diameter 40–60mm) and was perhaps a causeway across the property boundary connecting the two gardens within the estate, and a possible route to and from the back of the playhouse allowing access by the players accessing the tiring house, wealthier patrons wishing to avoid the main entrance on Maiden Lane, and vendors selling victuals out of Cholmley’s house to playgoers inside.

Excavation showed that to the west of the gravelling the ditch was revetted (i.e. having a retaining wall) with timber post-and-plank; to the east, this ditch was clearly part of the drainage system.33 Full dimensions of the ditch are unknown, but one part measured at least 2m wide and 0.90m deep, cut through the natural clay.34

Excavations by Museum of London Archaeology (MOLA) revealed the boundary ditch to the east was also revetted (fig. 10).

The revetment comprised a series of oak posts, apparently driven into the western side of the [east] ditch cut, against which horizontal planking had been set. No evidence of joints and fittings was located in the area excavated. The planks were set against the cut of the ditch, although not fully exposed. Documentary evidence from the Surrey & Kent Commissioners for Sewers indicates that not only were the sewers subject to constant re-embanking and re-enforcing (from the 16th century onwards) but that the sewers in the vicinity of the Rose remained as ‘open-ditches’ at least until the early 19th century … It is possible therefore, that the recorded timbers are contemporary with The Rose.35

In April 1588, the Surrey and Kent Commission of Sewers orders Henslowe to maintain the ‘x [ten] pole[s] more or les lye[i]ng against ther grownd at t[he] new [Rose] plaie house’(fig. 11).

In August 1605, towards the end of the playhouse’s life, Henslowe is once again ordered to ‘mend sufficiently pyle and boarde three poles more or lesse of the bancke against his [Rose] playhouse in Maydlane [Maid Lane]’(fig. 12).

[29] Where they met a road or path, Norden suggests they go under it or a bridge, as suggested by the bump in the ditch to the south directly opposite the Rose.

[34] Bowsher and Miller note that from the southern lip of the northern boundary to the northern lip of the southern boundary measures 25.5m (83ft 7in), and may have been closer to 94ft if measured from the middle of each ditch. However, 94ft west of the eastern ditch falls way short of the western ditch, suggesting the original parcel of land mentioned in the ‘deed of partnership’ (fig. 7 [3]) was, they suggest, a subdivision made to create a specific ‘playhouse plot’ that separated the land attached to Cholmley’s house: ‘Thus, the measurement [of the plot] was indeed ‘little more or lesse’ and its precision need not be taken literally’ (Bowsher and Miller, The Rose and the Globe, 26).