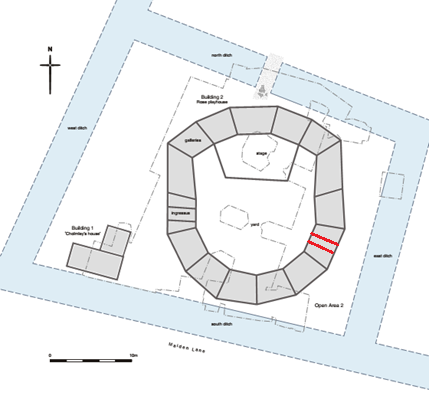 Plan of Phase II, showing the possible location of the ingress into the lower gallery

The model of the Phase II playhouse by the Museum of London (see fig. 93 [5.8.5) appears to have the ingress to the lower galleries to the left and right of the yard positioned symmetrically opposite one another.

Fig. 80: Position of the ingresses to the lower gallery in Phase I (symmetrical) and II (asymmetrical) © MOLA261

Here in the Phase I model the ingress on the left of the stage has likewise been mirrored by adding another on the opposite side, although the eastern side of the playhouse has yet to be excavated. In retaining a similar symmetry in Phase II, the ingress would have needed to be moved. As Henslowe made use of some of the existing structure from Phase I—only the northern half was dismantled and rebuilt—it is feasible that the right-hand ingress, if there was one, would have been left intact in Phase II, saving a lot of additional rebuilding work and expense even though this disrupts any symmetry in design from the first phase. In the Phase II model, therefore, the ingresses have been left in the locations they are in for Phase I.

[261] The red lines showing the location of the ingressi are an addition to the illustrations in Bowsher and Miller, The Rose and the Globe, 91 and 125.

5.6 Stairs up to the galleries

5.6 Stairs up to the galleries