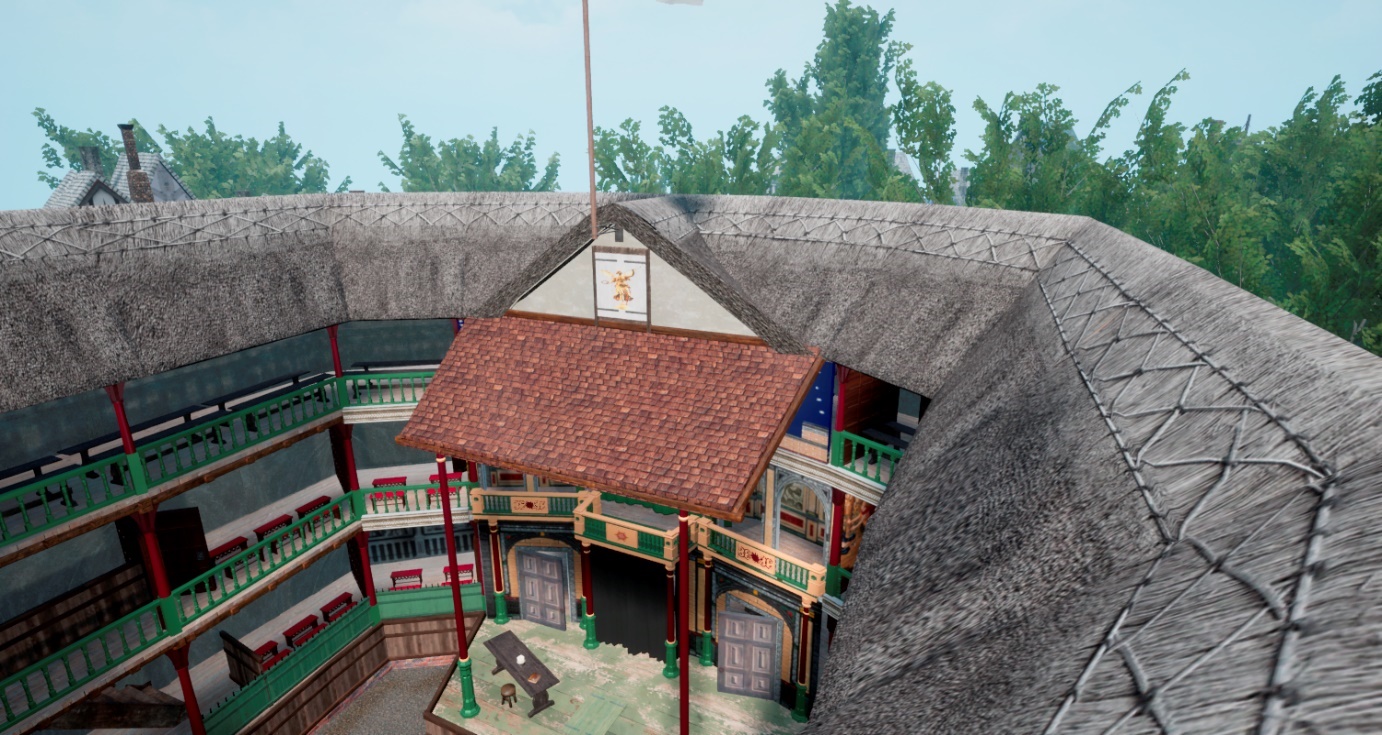 The roof or cover over the stage

Unfortunately, the archaeological record leaves no trace of the superstructure above the stage.

Norden’s images on his map of 1600 appear to be contradictory. In one image Norden suggests what appears only to be a gable following the lateral ridge at right angles to the circumference and which appears flush to the main frame. In the other depiction it appears to be a chorded roof ridge with a roof line parallel to the main frame similar to the stage roof depicted in the sketch of the Swan (see fig. 26 [4.4.1]).

It should be noted that Norden in 1600 also drew the stage roof in the same configuration on the Bear Garden (a feature absent from a bear-baiting arena) and the Globe (which had a different stage orientation to the Rose) suggesting that, like the houses in his drawing, these were generic, homogenous representations rather than a detailed drawing of the individual buildings themselves.311 Gurr attempts to justify the difference in the depictions of the Rose in Norden’s drawing in 1600 by suggesting ‘[e]ither Norden was wrong in showing a gable-fronted stage cover, or else the first Rose of 1587 had a stage cover like a penthouse, with its roof ridge running across a chord of the polygon [fig. 91a], while the second was altered to give it a ridge at right angles to the northern gallery wall and a gable front, as depicted by Norden [fig. 91b].’312 Gurr’s second proposal is, however, based on wrongly attributing the drip line in the yard running parallel with the front of the stage as belonging to Phase I.

The dimension of the stage pillar bases (0.47m2) suggests something about the dimensions of the pillars and what they may have been capable of holding aloft.Bowsher asserts that ‘the 1600 panorama with a forward projecting gable built into that of the main frame, [is] a structural position not contradicted by the archaeological evidence.’313

As part of his illustration of the Phase II stage cover, C. Walter Hodges includes a projecting gable built against the main roof of the tiring house (fig. 92)  for containing the hoisting machinery for the ‘throune [throne] in the heavens,’ which Henslowe installed in 1595, following Norden (fig. 91a). In drawing a projecting gable out over the stage, Hodges explains:

[W]hen later I came to make measured drawings of the surprisingly smaller circumference of the Rose’s interior, I found the effect of [drawing] such atransversely-set hut very clumsy-looking and ill-adapted to the shape and size it had to occupy. Much better within this small circle would be a gable-shaped hut, thrust forwards from the ridge-line of the surrounding gallery roofs towards the centre which is shown in the four theatres—the Rose and the Swan among them—represented in John Norden’s 1600 panorama of Bankside.315

The Museum of London model of the Rose playhouse, Phase II, on display at the exhibition at the site of the remains follows C. Walter Hodges’ reconstruction.

It makes little practical sense for Henslowe to have accommodated such a ‘hut’ into the redesign of his playhouse in 1592 with the intent to add a throne in the heavens only to wait until 1595 to install it. The addition of the throne and its mechanisms was more likely to have been an innovation in staging practices in 1595, and that Henslowe found a way to accommodate this into the earlier redesign.

Furthermore, given the size of the pillar bases, this projecting gable or a structure similar to that at the Swan was most likely to have been too heavy and unstable.

‘The stage roof structure is very heavy, and the isolated stage columns have to be large and fixed to be able to support it. A better solution [than the stage roof at the Globe] is to have the gable at the back of the stage (you will see that this still gives space to position a heaven’s trap), and to cover the stage with a lightweight lean-to structure.’316 There is room in the gable above for hoisting machinery for the ‘throune in the heavens.’ This idea is also accommodated by the discovery that the rear stage wall built for Phase II was distinctly heavier and more robust than the adjoining gallery walls and appears to have been designed for considerable load bearing.

Greenfield suggests the following design (fig. 95) for the post-1591/2 stage roof, which fits with the Norden map image (see fig. 91b):

This stage roof design also means there is only one position for the heavens trap—upstage, quite close to the frons. The positioning means that the heavens trap and stage trap would not be vertically aligned (i.e., the heavens trap would not be directly above the stage trap), and there would be ample space further downstage to accommodate the stage trap. Such a position would also be convenient for hoisting players from the stage up to the balcony: for example, Englishmen for my money has the Falstaffian lover hoisted up to his love ‘above’ in a basket (‘How heavie the Asse is,’ she quips) and left suspended in mid-air while he is mocked and pelted with a cushion.318

As C. Walter Hodges points out when discussing his own design, ‘it has to be considered that a more rectangular shape, not so nicely matching the shape [of the stage] below, might have been simpler to construct.’319

A thin depression line within the new yard surface in front of and parallel to the stage wall, caused by rain water, indicates that the stage roof projected c. 1.2m (4ft 2in) beyond the edge of the stage area and was unguttered.

It is also worth noting that the drip line was the same distance from the stage as from the gallery front suggesting also that the roof could have been thatch, but which would have added considerable weight to the roof, and the structure would have had to give a slope of c. 50o or more. C. Walter Hodges’ projecting gable provides such a slope, although he opted for wooden shingles because, he explains, ‘the roof and its attachment to the upper storey of the tiring house at the back, would make it unsuitable for thatching used on roofs elsewhere in the building.’320 His design requires a flat roof to project from the ‘hut’ or projecting gable, requiring some kind of waterproofing perhaps from lead flats, which Bowsher and Miller point out is highly unlikely because the two front columns would probably be insufficient to bear such weight, and lead is also absent from the Rose accounts but present in the material bought by Henslowe for other properties.321 A construction similar to that at the Swan would have provided a slope enough for thatch, but we can already dismiss this design as being too heavy. Whilst the majority of pantiles discovered at the site of the Rose post-date the playhouse, some were found to be associated with both phases of the Rose (in Phase II they were present in the yard flooring dated to 1592) and may support the suggestion that they were used to tile the heavens/roof over the stage; Bowsher and Miller suggest ‘it is just possible to ‘read’ the De Witt drawing of the Swan playhouse as showing pantiles rather than thatch over the stage.’322 Peg tiles, roofing tiles fashioned with a hole in them and fixed with a peg requiring a minimum pitch of 40°, were also discovered at the Rose site and in greater quantities, some used in the construction of walls, although most but not all were dated post-playhouse.

The presence of roof tiles associated with the Rose suggests they were used for roofing. ‘Tylles’ and the employment of a ‘tyller’ were accounted for on other properties of Henslowe’s including the Fortune playhouse, and ‘Englishe tyles [for] the upper Rooffe’ appear in the contract for the Hope playhouse, which Bowsher and Miller think almost certainly meant pantiles. Pantiles ‘had a particular advantage over peg tiles, shingles and thatch, especially for the over-stage area, where sight lines from the uppermost galleries could easily have been interrupted by large expanses of roofing: pantiles can be laid at a much lesser pitch’ of 30° or less.323

However, for the over-stage roof Bowsher says ‘my gut feeling was that it was an unguttered shingle tiled roof.’324 A single wooden shingle tile (fig. 96) was found in the demolition debris (all others presumably dismantled and taken away to be reused), which may or may not have belonged to the stage roof, even though shingles or specific shingle nails are absent from Henslowe’s accounts. The usual pitch for a shingle roof would be 40o minimum, which would suit a stage cover and they would have had the benefit of being relatively lightweight.325

[311] C. Walter Hodges points out that, ‘in this same view Norden appears to show the Swan theatre itself as being furnished with the same sort of superstructure as in his other three theatres [i.e., a small gabled loft thrust forwards from the tiring house section of the main roof], which is in absolute contradiction to the evidence of the de Witt/van Buchel drawing’ (Hodges, ‘What is possible,’ 50).

[315] Hodges, ‘Reconstructing the Rose,’ 82. For further explanation of his illustration, see Bowsher, The Rose Theatre, 78–83.

[322] Ibid, 171. A pantile is a type of fired roof tile, normally made from clay, which is S-shaped in appearance and is single lap, meaning that the end of the tile laps only the course immediately below. A pantile-covered roof is considerably lighter than a flat-tiled equivalent and can be laid to a lower pitch. Pantiles were first thought to be imported from Holland in the early seventeenth century but discovery at the Rose suggests they were in use in England for roofing much earlier.

[323] For discussion of the different roof tiles unearthed at the Rose site, see Bowsher and Miller, The Rose and the Globe, 171–72.