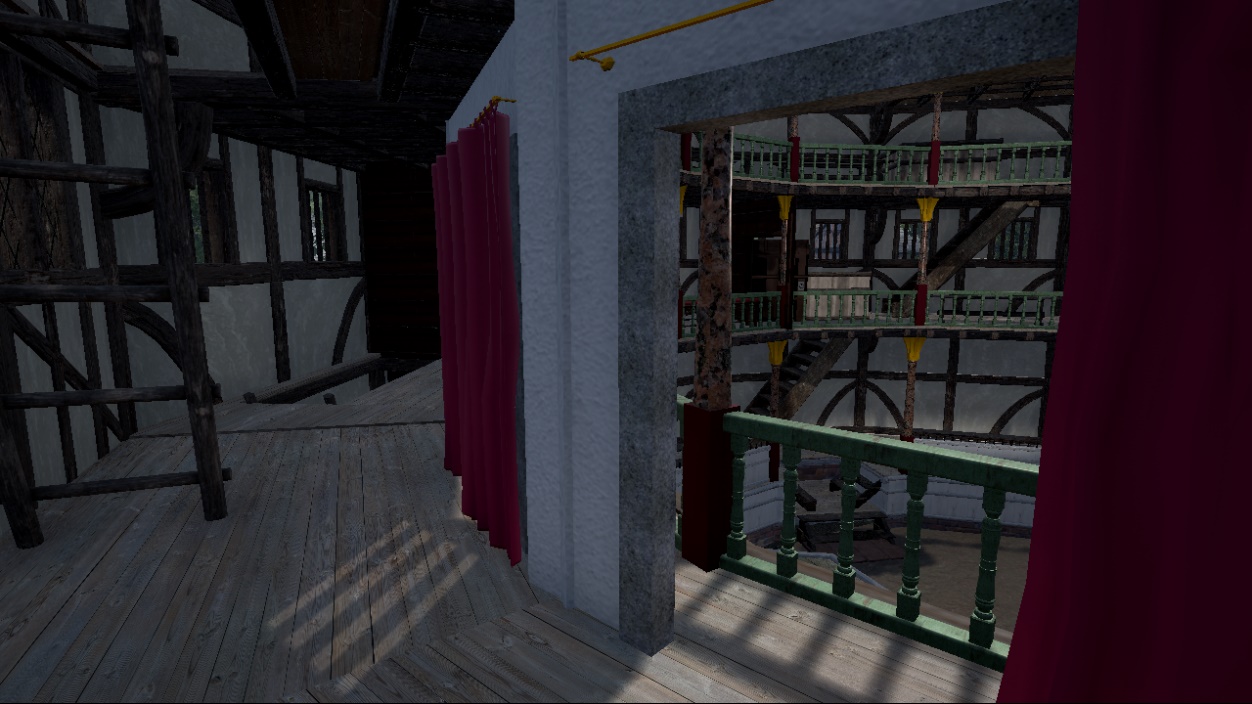 View from Level 2 looking out towards the balcony

Scott McMillin counts that more than half of all the plays written for the Rose use an upper acting space, or ‘above,’ indicating that the Rose had an enhanced capacity for thisparticularity of stagecraft (see 5.10.3).217 The balcony was used as a performance space over the stage and was integrated with part of the Level 2 tiring house, with internal stairs for access.

Of the plays considered to be part of the Rose repertoire, where texts or plots are extant, a number give explicit or implicit directions, such as ‘above on the walls,’ ‘upon the walls,’ ‘on the turrets,’ ‘a gallery,’ ‘above at the window,’ ‘this window,’ and ‘in the window.’ 218 No real depth is required, and most speak from the balcony to someone on the stage. A few plays require extended acting ‘above’ with between three and five characters, or unspecified numbers, including some action.

Gurr argues that ‘[r]egular use was certainly made [at the Rose] of an acting space over the stage … called for both in the earlier plays and the later,’ citing George Peele’s David and Bethsabe, which he thinks is certainly written before 1592, and the storming of Rabbah and the Babylon Ammonites ‘upon the wals,’ and an attack on what is called ‘the Tower‘ of Babylon [‘Let us assault and scale this kingly Tower’]’.219 Other plays Gurr conjectures belong to the early Rose, ‘have scenes located “above,” most notably The Spanish Tragedy … Green’s Alphonsus of Aragon also mentions a gallery, and perhaps Venus may have been “let down from the top of the stage” at this place “above”.’220

For the Phase I model, inset walls have been painted to resemble white marble. Plain curtains like those depicted on booth and mountebank stages of the period have been added in order to give the spaces more flexibility and, if necessary, mask the tiring house and stairs behind (see discussion of stage hangings, 4.1.11). A balustrade has also been added and painted in keeping with the rest of the balconies.