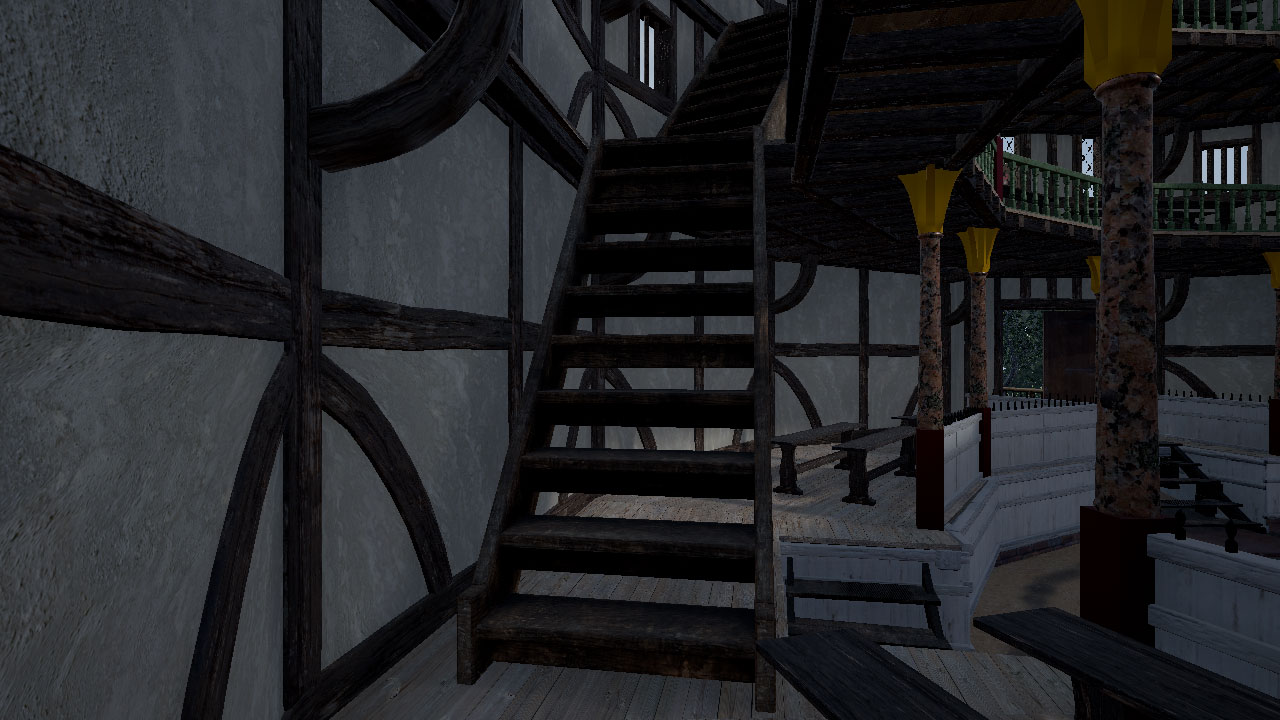 The staircase rising from the ‘ingressus’ to the second-tier gallery

No evidence in the archaeology was found for the position of stairwells or staircases up to the first or second floors. In their considerations for designing the new Shakespeare’s Globe playhouse in London, Jon Greenfield and Peter McCurdy concluded that there were three ways the staircases rising to the upper galleries could have been built, any one of them might have been what featured at the original. Bowsher suggests that internal stairs were probably limited in number because they would potentially have reduced seating capacity.100 Perhaps the obvious places for internal staircases rising to the upper storeys would be next to the ‘ingressus.’ Stairways would likely have needed extra support, such as a brick foundation in this location at the nearest angle of the polygon. 101

At the Theatre (1576) there appears to have been a clear association between the ingressus, or ‘door,’ and access to higher levels, for money ‘gatherers’ were to ‘stand at The door that goeth uppe to the Galleries of the said Theatre to take … money that should be given to come uppe unto the said Galleries at that door.’102 Coins were ‘gathered’ in clay pots, or money boxes (figs. 41 and 42), rather like a modern piggy-bank, which could be delivered to Henslowe’s office where they were broken open and the takings collected and recorded.

In their computer model of the Theatre playhouse, a collaboration between Museum of London Archaeology (MOLA) and Cloak & Daggar Studios, the stairs have been configured to rise in a spiral to the galleries above (fig. 43), which is another way the Rose may have contained the staircases to a single bay in a bid to minimize impact on space for spectators.

In his design for the Rose Phase I (fig. 44a), Jon Greenfield positions the staircases rising to the upper floors in the bay closest to the stage—where arguably sightlines may have been poor; as does Rhys Griffin in his 3D computer model of the Rose, who has also boxed them in (fig. 44b).

An alternative would have been to place the staircase on the outside of the building. There is no evidence for any form of external stair turret or tower at the Rose, which seems likely to have been a later innovation, possibly around 1610.

‘A Mapp of the Mannor or Lordship of Old Paris Garden Surveyed 1627’ (fig. 45) shows the ground plan of the Swan, built later in 1595 some distance to the west of the Rose, with fourteen sides and a stair turret (highlighted) on its northeastern flank, an area of the Rose yet to be excavated.

Gurr argues that ‘External stair turrets gave the audience access to the upper galleries, without any sacrifice of seating space inside. The Hope contract specified that its stair turrets should be copied from those at the Swan. The logical place for a stair turret at the Rose would be on the northeastern flank, closest to London Bridge (which most of the prospective customers would have used). Excavating the eastern flank of the site might tell us about the disposition of the Rose’s interior structure above ground, and whether or not it had internal staircases.’106

The later Hope contract (1613) also specifies external stair turrets.107 Hollar’s view of Bankside clearly shows external turrets on the Hope and on the second Globe, one situated to the northeast (highlighted, fig. 46).

Bowsher’s view is that we can be certain there was not a stair turret on the western side, and on the eastern side the archaeology already known to us would suggest that there simply wasn’t enough room between the playhouse and the north side boundary ditch to accommodate a stair turret.108

In the tiring house, a separate staircase must have run between the gallery levels to give performers access to and from the back entrance to the stage and the second level gallery, and, presuming there was one, the third level where space may have been given over to storage, an office, and the gable. Stairs here may also have given wealthier patrons private access to ‘Gentlemen’s rooms’ or a ‘Lords room,’ if these existed in the Phase I building.

[105] Rhys Griffin (2016), in association with ‘The Lost Valley of London’ and The Rose Playhouse: https://www.roseplayhouse.org.uk/experience/videos/ [accessed 22 July 2017]

4.6 ‘Ingressus,’ or
entrance into the lower
gallery