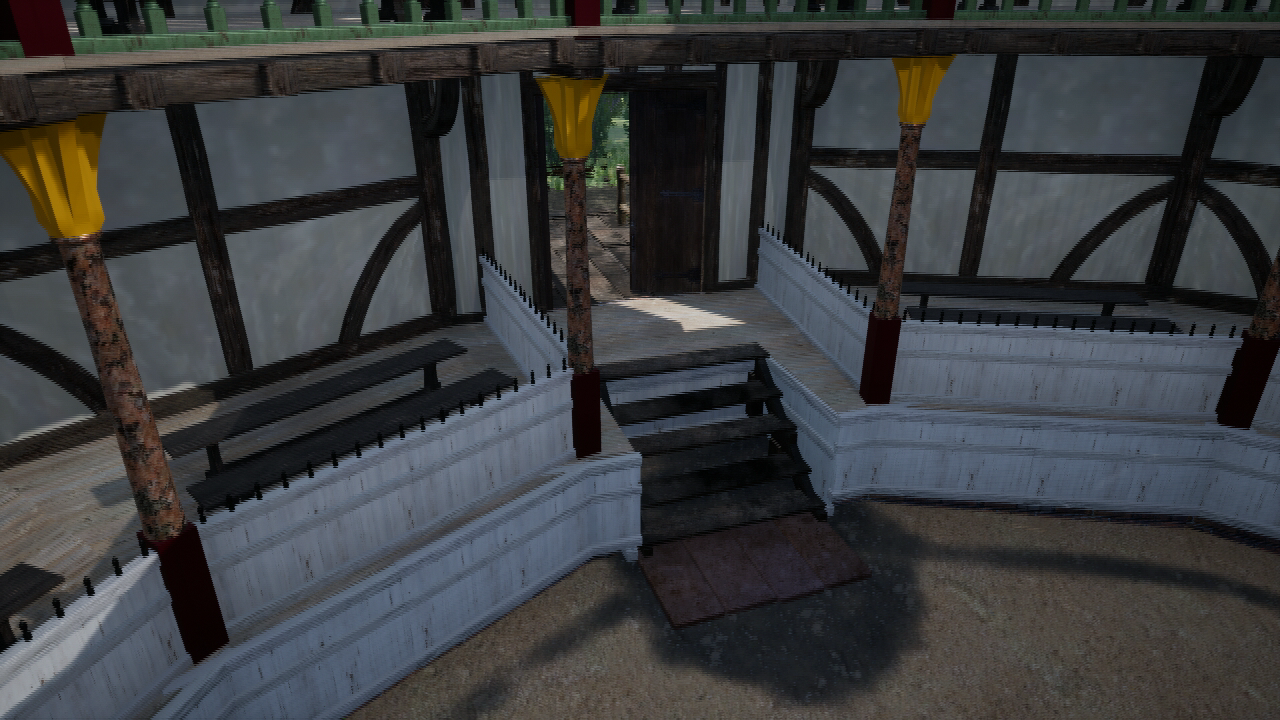 The main entrance, without immediate access to the galleries

4.5.2 Main entrance to the playhouse

We are never going to fully understand the interior arrangements of the playhouse. A large single doorway on the southern side is shown on Norden’s maps of 1593 and 1600 (see fig. 53 [4.9.1]), but his drawing may be more generic or representational than precise.

From the excavations, there is no firm evidence for an entrance into the building from the outside; however, brick footings to the southeast of the inner wall may suggest the presence of an entranceway. Excavation found considerable wearing of the ground surface in the inner yard next to the inner wall of bay 1 (see fig. 21 [4.3]), running parallel with Maiden Lane, suggesting heavy use (i.e., footfall). A brick layer there may have been a possible threshold.

It seems likely that playgoers entered the playhouse via the lower gallery, so stairs were required to descend from the gallery into the yard (fig. 36). Funnelling crowds across the footbridge and directly into the lower gallery floor, as opposed to entering the playhouse from the bridge at ground level, would have the advantage of protecting the north side of the south ditch from erosion through constant footfall.

We have little idea about how the main entrance worked, or how many entrances there were from Maiden Lane, although there was only so much room available. (Several entrances from Maiden Lane would have been useful, at least in theory, to accommodate the coming and going of up to hundreds of spectators, and Jon Greenfield’s suggestion for multiple entrances has already been considered, above.) There may have been some provision for immediate access from the main entrance into the galleries giving playgoers an opportunity to avoid the yard.

Such an entrance risked creating a bottleneck, however, and may have made collecting or policing payment difficult. Alternatively, the main entrance may have acted as a mechanism for crowd control: having collected a penny at the entrance, the playhouse design may have funnelled all spectators immediately into the yard. Then, if they wished, they could opt to pay a second penny to enter the gallery via an ingress (see 4.6).

From the legal documents pertaining to the earlier Theatre playhouse, built in Shoreditch in 1576, a witness described how he, together with Margaret Brayne (John Brayne’s widow) and her supporter Robert Miles, went to playhouse ‘vppon A playe daye to stand at the dor that goeth vppe to the gallaries of the said Theater to take & Receyve for the vse of the said Margarett half the money that shuld be gyven to come vppe into the said Gallaries at that dor.’92

The two-payment system that worked at the former Theatre playhouse may have also worked for the Rose.

In his Perambulation in Kent (1576), William Lambarde described a penny-by-penny system of collecting the take at playhouses, whereby spectators ‘they first paye one penny at the gate, another at the entrie of the Scaffolde, and the thirde for a quiet standing.’93 If ‘scaffold’ here refers to the galleries (and not the stage), Lambarde’s penny-by-penny system implies that access to the upper galleries was had after entrance to the yard.

Similarly, Thomas Platter, a Swiss scholar who in 1599 records his visit to a London playhouses to see Julius Caesar—usually assumed to be the Globe, but it is conceivable that he is speaking about the Rose—explains that ‘For whoever cares to stand below only pays one English penny, but if he wishes to sit he enters by another door, and pays another penny, while if he desires to sit in the most comfortable seats which are cushioned, where he not only sees everything well, but can also be seen, then he pays yet another English penny at another door.’94

In the model of Phase I, although it isn’t known if such choice of seat was available at the Rose, so may be entirely incorrect, the option of paying a third penny for a more exclusive room for a seat with a cushion and closest to the stage has been given.

[93] William Lambard, A Perambulation of Kent, Conteining the Description, Hystorie, and Customes of that Shyre (London: Ralphe Newberie, 1576), 188.

[94] Thomas Platter, Travels in England 1599, trans. Clare Williams (London: J. Cope, 1937), 167. The generally held assertion is that Platter’s account refers to the new Globe. However, Schanzer raises the possibility that the play was not Shakespeare’s and the playhouse the Rose, where the Admiral’s Men had new Caesar plays in 1594–95 and again in 1602 (Earnst Schanzer, ‘Thomas Platter’s Observations on the Elizabethan Stage,’ Notes & Queries 201 n.s. 3:11 (1956): 467), and Egan concludes that the available evidence suggests ‘we should not assume that Platter went to the Globe to see Shakespeare’s play.’ (Gabriel Egan, ‘The Lords Howard’s men at the Rose and on tour in 1599,’ Notes and Queries 244 (1999): 234–6). Rutter conjectures from receipts from the Rose that either ‘Playing may have been inhibited over the summer [June–October 1599] as a precaution against the plague’ because ‘[Henslowe] did not record further [admission] receipts until October,’ or that this ‘might be interpreted to mean that the players, having turned over their “wholle gallereyes” to Henslowe for the twelve months preceding, collected the galleries themselves during the summer’ allowing the Rose to have been open for a September performance of a ‘Caesar play’ (Caroline C. Rutter, Documents of the Rose Playhouse, 2nd edn (Manchester: Manchester University Press, 1999), 168).

4.6 ‘Ingressus,’ or
entrance into the lower
gallery