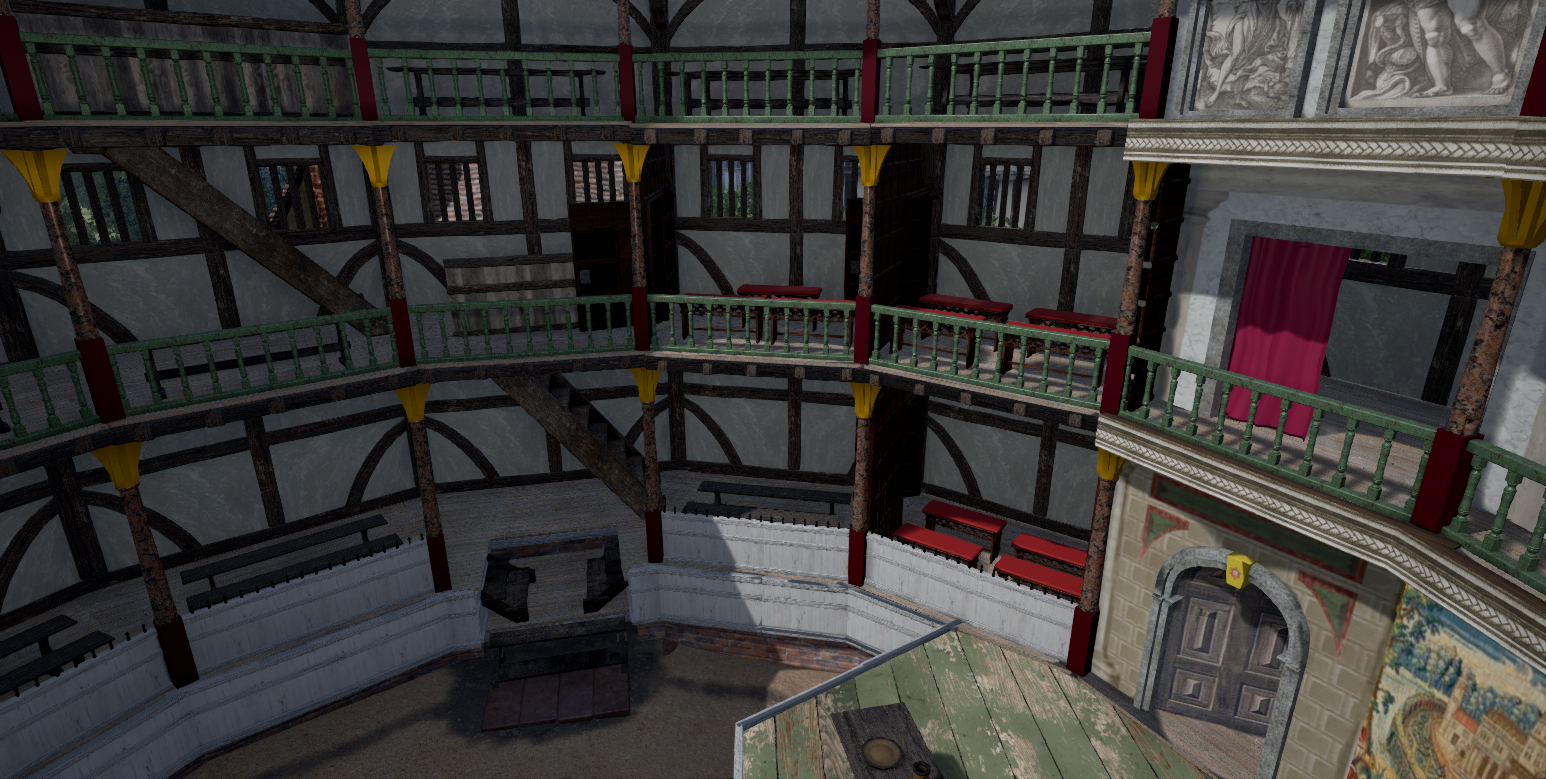 There is not much information about seating from either archaeological or documentary sources.

Sir William Davenant’s prologue in The Unfortunate Lovers (1643 [1638]), performed at the private Blackfriars, speaks of the citizenry in the two-penny galleries of an earlier generation who, attending the public playhouses twenty years before (my emphasis):

…to th’ Theatre would come
Ere they had din’d to take the best room;
Then sit on benches,not adorned with mats,
A graciously did veil the high-crowned hats
To every half-dress’d Player, as he still,
Through th’hangings peep’d to see how th’house did fill.

Antimo Galli, a Florentine reporting home, refers to such audience arrangements in his report on his visit to the Curtain playhouse in August 1613, describes how one could pay to ‘go into one of the little rooms, to ‘sit in the degrees that are there,’ or for ‘standing in the middle down below.’115 If such degrees were designed into the Rose they were probably built from floor levels within the galleries rather from the ground surface, for no evidence of supports, or ‘needles,’ were found to have left traces in the clay surface under the lower gallery floor.116 Henslowe’s Fortune contract and Hope contract imply secondary elements like seating were made from cheaper and easier-to-work imported softwoods generally referred to as Baltic fir, commonly available in London in standard sixes.117

Platter records that in certain locations in the galleries ‘the seating is better and more comfortable and therefore more expensive. For whoever cares to stand below only pays one English penny, but if he wishes to sit he enters by another door, and pays another penny, while if he desires to sit in the most comfortable seats which are cushioned, where he not only sees everything well, but can also be seen, then he pays yet another English penny at another door.’119

Conjectured heights of the lower and second-tier gallery at the Rose suggest sufficient sightlines for a seated audience. Seating in a third gallery was more problematic because of ‘compromised’ sightlines.120

Tiffany Stern (cited in Egan) argues that the galleries are where spectators would expect to stand and walk rather than to sit, and points out that the label ‘porticus’ attached to the top most gallery in the sketch of the Swan playhouse is the Latin word for a covered walkway; and in a draft lease for the Theatre (1576), Burbage indicates that spectators could sit or stand in the galleries.121 We might reasonably speculate that this was true for the Rose, dated between the Theatre and the Swan.122

In the completed model, it was decided not to include seating ‘degrees’ (the image below shows how these may have looked) but instead to provide a combination of forms (benches) and room for standing.

A spectator may therefore pay a penny to enter and stand in the yard; or pay a second penny to enter the Level 1, 2 or 3 galleries to sit or stand ; or pay a third penny to enter a private room (Level 1 and 2) for quiet standing or to sit on a two-seater stool with a cushion (fig. 49), closest to the stage.

Andrew Gurr and James Orrell calculate that ‘the internal depth [of the galleries at the Rose] was about 10ft 6 ins, and the average length of the benches in them was about 13 ft. Using the Elizabethan standard separation of 18 ins fore-and-aft, it would appear that there were at least six benches in each gallery bay … giving a total gallery capacity of 1404 persons.’123 Their calculation seems not to give room to those standing, however.

[122] Of course, if we’ve learnt anything from the recent discoveries of the Theatre, the Rose, the Curtain, and the Fortune playhouses, the excavated remains suggest that each was different and that the idea that there was a chronological pattern of evolution from one building to the next isn’t borne out by the archaeology.