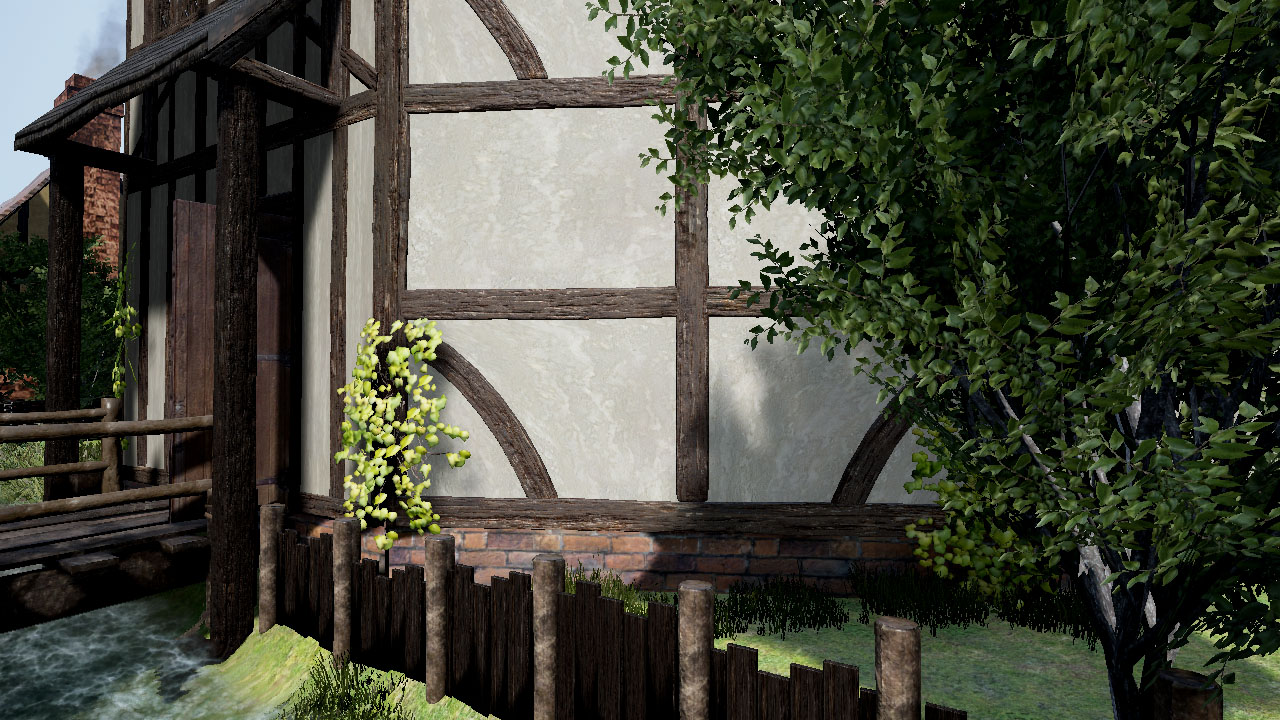 The outer wall consisting of a low brick wall (built on top of subterranean chalk foundation piles) above which sits the load-bearing timber sleeper beam, or ground-cill, on which is built the timber superstructure, with wattle and plaster infill

The outer sides of the 14 bays were an average of 5.0m in length, equivalent to the Tudor building measurement of a rod (5.5 yards; 16ft 6in; more commonly a unit of surveying rather than building, the rod was possibly used at the Rose to set out the plot rather than the building).53 Each section of outer wall had three piers, or pile caps, set approximately 2.5m (8ft, 2.5in) apart along its length, placed at the centre and at the ends of the outer side of each polygonal bay (fig. 21). Thus there were 28 piers around the entire outer wall of the building.54 The rectangular piers were constructed of mortared chalk blocks built flush with the variable external ground surface. The piers were then surmounted by brick plinths of varying heights to provide a uniform platform on which to build the timber superstructure (see  ‘remains as found,’ fig. 22).

The model is based on Bowsher’s suggestion that the width of the overlying superstructure wall is likely to have related to the width of the wall foundations—0.24m deep and wide, or the equivalent of 9in, which is just over the length of a Tudor brick and the standard for a Tudor cill beam. In the excavation, these foundations appeared flush with the Tudor ground level. Above the ground (see ‘reconstruction,’ fig. 22) there was likely have been a low brick wall on top of these foundations, about 0.33m (1ft 1in) high, to provide a base for the timber sleeper beams or ground-cills. These cills would act as load-bearing members for the superstructure frame above the inevitably damp ground level.56

Evidence from the site suggested that the outer walls were filled with wattle and plaster (fig. 23). As L. F. Salzman explains, ‘[w]attling consisted of a row or upright stakes the spaces between which are more or less filled by interweaving small branches, hazel rods, osiers, reeds, think strips of wood, or other pliant material. On one side, or more usually both sides, of this foundation earth, clay, mortar, or plaster is daubed and thrust into the interstices, the surfaces being smoothed and usually treated with plaster or at least a coat of whitewash.’59

[54] In two instances in the archaeological remains, a brick plinth surmounting the pile caps remained, and traces of the shallow chalk foundation wall also survived in the southwest corner.

[56] Bowsher, The Rose Theatre, 37. Greenfield suggests that ‘the cill height can be worked out from the highest ground level from the levels in their [the MOLA archaeologists] records [for the topography of the site]. Contemporary good practice tells us that the timber cill would be at least 12 inches above the ground, set on a brick plinth, and the Fortune contract stipulates fifteen inches of brickwork’ (Greenfield, ‘Reconstructing the Rose,’ 25–26), although it’s unclear how Greenfield relates the ‘one foot,’ stated in the Contract, to ’15 inches.’