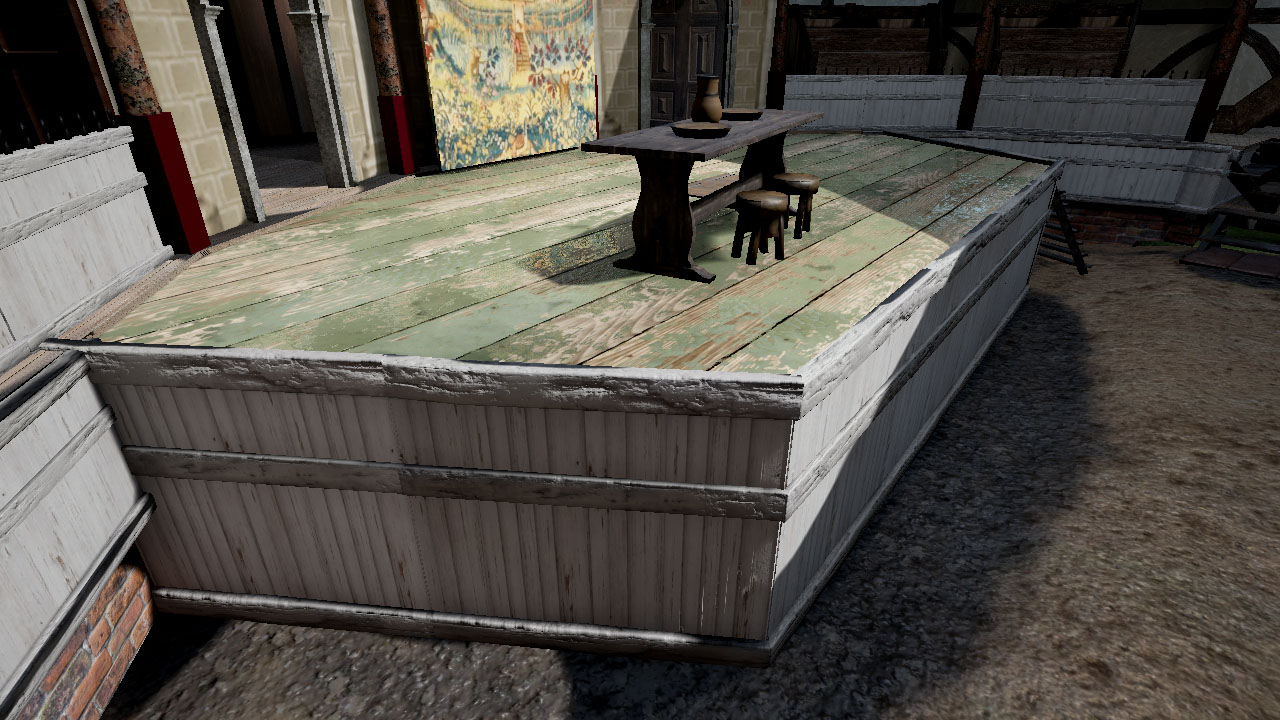 The stage, seen from the yard

The stage appears to have been an elongated hexagon projecting from the line of the internal wall in the north of the building (fig. 51).124 The stage foundations consisted of a brick footing about 0.30m wide with a lacing of stout timbers at its ends.125 At the front it had three edges: a central section of 8.08m, and two tapering sides, c. 3.0m, therefore covering an area approximately 47.7m2.126 The height of the stage above the ground level isn’t known, but Bowsher suggests that it may have been the same height as the raised lower gallery floor.127

The construction of the main frame or scaffold, an integral structure, meant that the stage was tacked onto the inner wall between bays 6 and 10 (see fig. 21 [4.3]). Its location diverged slightly from the regularity of the polygon, being neither exactly parallel to bay 8, behind the stage in the north, or to the main entrance (thought to be bay 1), opposite to the south—a difference, Bowsher conjectures, that probably wasn’t too noticeable on the ground, but possibly to those in the gallery bays adjacent to it.128 Bowsher concludes that the stage was designed as a permanent feature.129 However, the 1989 archaeological dig stopped short of verifying whether the Phase I stage was built into the gallery frame/foundations or was separate to it.

The slightly off-centre nature of the stage leads Greenfield and Gurr to conjecture that the stage may have been an addition in the first five years of an evolving design (see fig. 35 [4.5.1]), but concede that more work needs to be done to understand this enigma.130 If in any future re-excavation of the site its integration with the main frame could be proved, there would be little room for doubt that Henslowe conceived the original construction to be a house for staging plays.

The Fortune contract (see fig. 16 [4.2.2]) specifies ‘all the fflowers [floors] of the saide galleries stories and stadge to be bourded [boarded] with good & sufficient newe deale bourdes.’ So it seems plausible that the stage was covered with deal boards, which, although soft wood and less hard-wearing than oak, would have made a better working surface—for grip by the actors wearing leather-soled shoes, for example.

In the model, we have followed Ronayne’s suggestion that the stage boards may have been painted green (terre vert) to represent the earth’s surface.131