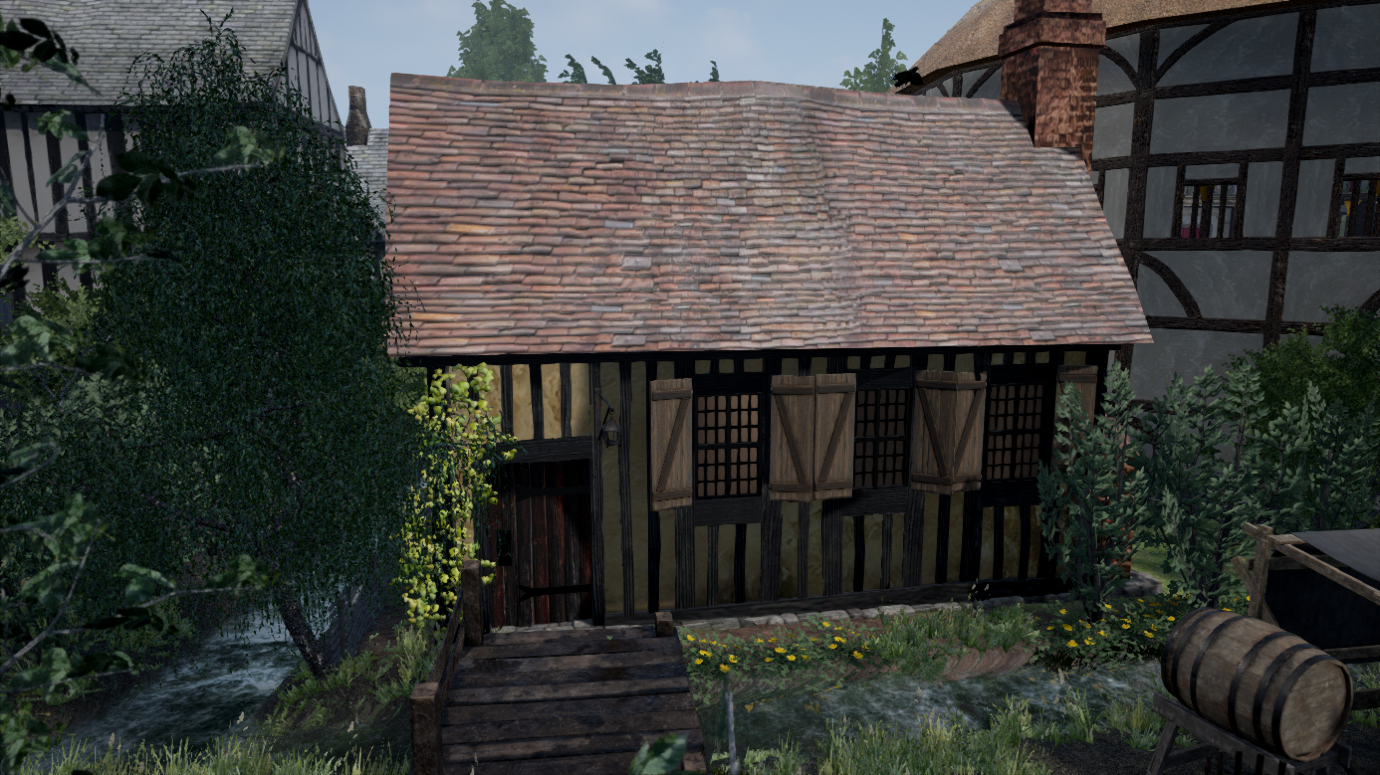 John Cholmley’s victualling house is equated with the ‘dwellinge howsse scittuate and standinge at the sowthe ende … adioyninge unto a lane there comonly called mayden Lane,’ referred to in the ‘deed of partnership’, which was a contract both for the use of the playhouse and for catering to playgoers (fig. 7 [3]). The agreement was for the house to be let to John Cholmley to keep victualinge in, and who was ‘to receive half the profits of the playhouse, and to have continuing use of a small house that stood on the grounds, a house that was already in his tenure, in return for quarterly payments by him of £25.10s commencing at Midsummer 1587, up to a total of £816 over eight years,’ although his name doesn’t materialise in Henslowe’s accounts for the playhouse.389

Norden’s maps of 1593 and 1600 depict the house (fig. 108), seen directly southwest of the playhouse. The inset in the map of 1600 (fig. 108b) depicts a door at its western end with two windows in its gable—suggesting a low two-storey structure—and a chimney in the middle:390

However, caution must be sounded. The image drawn by Norden is probably simply a generic symbol for ‘house’ rather than indicative of the building itself. A later map of Paris Garden (‘A Mapp of the Mannor or Lordship of Old Paris Garden Surveyed 1627’ by Thomas Aldwell), which shows a representation of the Swan (labelled ‘Olde Playe House’), of known  diameter, suggests that whilst road ways are accurate and to scale the indication of houses is not, using a generic symbol rather than scale drawing to represent buildings (see fig. 45 [4.7]).391 Likewise, Norden’s image of Cholmley’s house may be a generic symbol.

The archaeology suggests that the house was modified in order to accommodate the playhouse (see fig. 110), so Norden’s depiction (fig. 108b) may resemble the original building. Based on the size of the chimney, the original may have been a long two-room structure divided by a central hearth 8m in length, with an entrance on its southern side—perhaps a baffle entrance, i.e., the entrance is by a doorway immediately against the side of an internal wall or chimney stack—with a footbridge across the sewer ditch to Maiden Lane, and contrary to Norden’s depiction of a gable end entrance.392

The reconfigured building appears from the archaeology to have been ‘L’ shaped (fig. 109), the eastern room (if it ever existed) having been knocked down and a new room built to the north.393 What would have been an internal chimney was rebuilt into the new eastern side wall, which is suggested by the archaeological remains, or was perhaps modified to create an external chimney stack, as depicted in the model.

The archaeology suggested another building to the north of Cholmley’s house was also knocked down to accommodate the building of the Rose playhouse, so modifications to the house were likely to have been made at this time.

The model has been based on the archaeological remains as described by Bowsher and Miller. The modified building consisted of two rooms. The first, to the south, was left over from the former building, extending a maximum of 4m eastwards from the western edge, with two parallel east–west walls running 2.70m apart (one of which is shown below labelled B[1275]). There are traces of two floor levels. One consisted of a plain-glazed tile floor in various shades of green, badly worn. The other, slightly higher and to the south, was probably a chimney base (as seen in Norden’s 1600 map?; B[1254]).

It is not known if the roof was modified to fit the new ‘L’ shaped building—as shown in the Phase II model—or if a new gable was added alongside the old (fig. 111).

Bowsher and Miller note the excavations suggest that the room to the north is a later addition to the house, and speculate that this could have been an addition at the time of the 1587 building of the playhouse to accommodate its new role as catering for the theatre. They argue that ‘[Cholmley’s] house was too small to have been a brewhouse, although it may have had at least a kitchen. It’s most likely use was for storage, and thus distribution, of food stuffs and drink … 40% [of the vessels found at the Rose site] were for cooking or serving food … such as cauldrons, tripod pipkins, skillets, bowls, colanders and chafing dishes, and flanged or flared dishes and porringers.’396

[389] William Ingram, ‘John Cholmley on the Bankside,’ Early Theatre 15.2 (2012), 43–65. E.K. Chambers speculates that the reason Cholmley isn’t mentioned in Henslowe’s accounts after the partnership agreement is probably because he died, thus dissolving the contract (Chambers, The Elizabethan Stage, II, 408). Ingram argues that he died at the end of April 1589, so the financial arrangement between Henslowe and Cholmley thus lasted for only two years.

[393] It is perhaps worth noting that William Dudley’s cutaway of the Rose playhouse, Phase I (see fig. 15 [4.2.2]), created before Bowsher and Miller published their analysis of the archaeology (The Rose and the Globe, 2009), has Cholmley’s house aligned north–south with a central chimney, as does Ortelia’s modelling of the house (2013): https://ortelia.com/project/recreation-of-the-rose-theatre/ [accessed 22 July 2017].