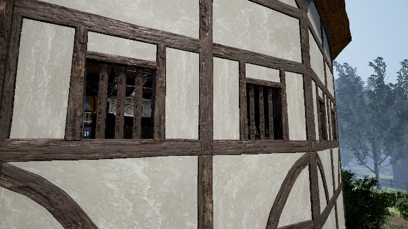 The construction of timber-framed playhouses in the sixteenth century comprised a footing made from chalk blocks and brick, a heavy oak frame made in structural bays, infill panels of lath and plaster, and a roof of thatch. This was fitted out with a carcass of coarse deal (Baltic softwood, red pine) and deal boards, nailed together with a combination of two-penny, three-penny, four-penny, and six-penny wrought iron nails, and a balustrade for the gallery fronts.

The Rose playhouse was built as a polygon of 14 sides.47 The model has been built based on the archaeology—the known positions of the surviving footings and the conjectured position of the superstructure (see figs. 19-21).48

In 1990, in Julian Bowsher’s first publication after the excavation of the Rose in 1989, the regular polygonal frame had been described as broken at the southern end where the angle of the walls had been thought to be shallower than those elsewhere—‘the foreshortening would have provided an almost straight side along the street frontage.’49 However, this supposition was based on faulty measurements, corrected by Bowsher in a further publication in 2007 and reconfirmed again in 2009.50 Understandably, this has led to misinterpretation of the front of the playhouse by scholars of the Rose before 2007.51

The model here comprises a polygon of roughly equal bays forming a ring with the southernmost bay parallel to Maiden Lane.52

[48] See also Jon Greenfield’s explanation for reconstructing the dimensions of the Rose, in Bowsher, The Rose Theatre, 121–25.

[51] For example, Andrew Gurr, ‘New Questions about the Rose,’ Times Literary Supplement, April 18 2003, n.p. The reconstruction designs of the Rose playhouse by Jon Greenfield are based on these faulty measurements, in Greenfield and Gurr, ‘The Rose Theatre, London,’ 330–40; as is the 3D model by Ortelia (2013).