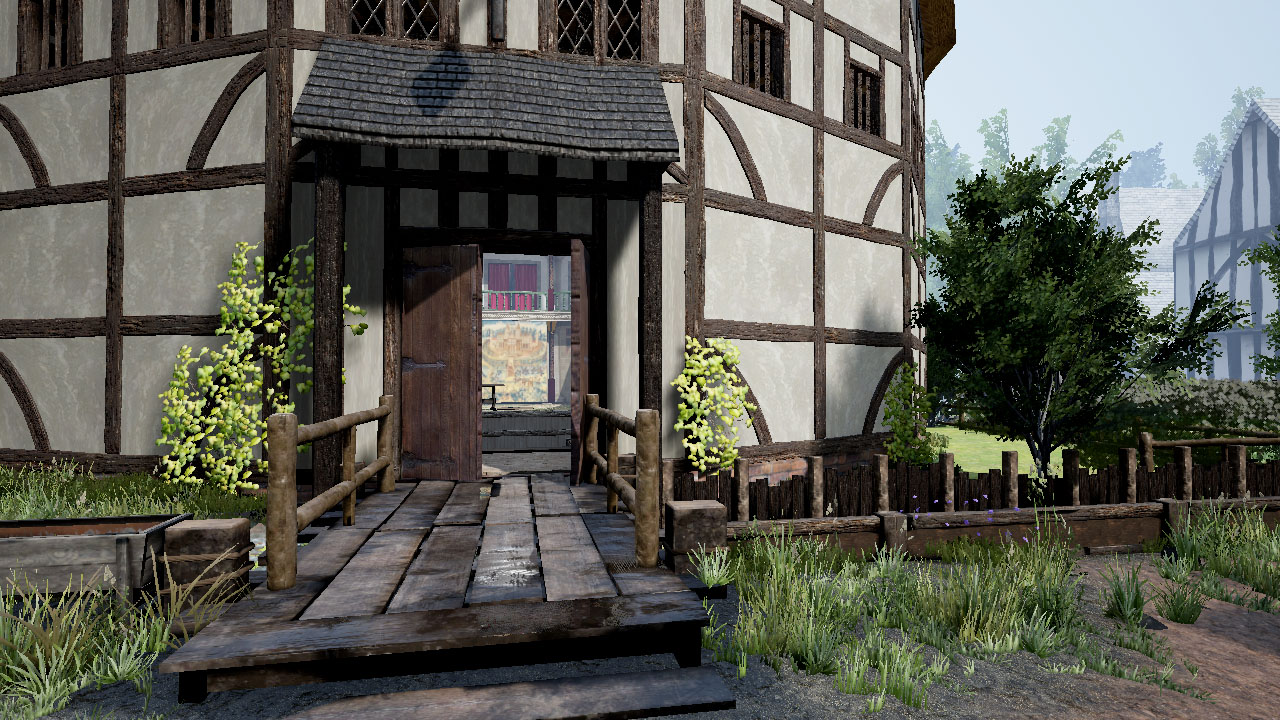 The main entrance to the playhouse, with bridge across the southern ditch

On the southern side of the building in Norden’s map of 1593 (fig. 8 [3]) is a feature interpreted as an entrance, and the ‘deed of partnership’ (fig. 7 [3]) holds Henslowe and Cholmley accountable to ‘repaire and amende all brigges and wharffes belonginge to the saide parcel of grounde.’ Norden’s map of 1593 shows the plot of land may also contained two other buildings (Cholmley’s victualling house to the southwest, unearthed during excavation [see section 6], and a second building to the southeast, an area not subject to excavation), suggesting that the street frontage may have had up to three footbridges over the southern boundary sewer ditch, to the three properties fronting Maiden Lane.

In his drawing of the front elevation of the Rose playhouse (fig. 13), Greenfield shows a main access to the yard with stairs either side (via doors to the left and right).36

Since then, however, Greenfield thinks that perhaps ‘there would have been as few access points as possible, to control the taking of money etc.’ and, in response to the Phase I model for this project, says

[I] like the idea that a penny was paid on the bridge, then another penny on access to the galleries. Perhaps I ran away with this idea a little, but my plan shows the main access to the yard with stairs either side, and this being the main way of access, and paying a fee, for all parts of the building. I added a canopy, and Bill Dudley and I got excited about how it made the building fit the later traditions of theatre entrances. Fancy, perhaps. You can also see that I changed the framing on the two bays facing Maid Lane to be of a higher grade—close studding and a little decoration, rather than a plain framing elsewhere. Fancy again—I have no evidence for this, but making something of the frontage is good architecture!38

Greenfield’s entrance design is partly based on faulty measurements, which led to misinterpretation of the configuration of the southernmost bays of the playhouse by scholars of the Rose archaeology before 2007 (see 4.3).

The model has borrowed this architectural good practice of close studding and a little decoration to the south entrance. It is more likely that only one main entrance existed, as depicted by John Norden.

[36] In part, this concept is based on the theory that the front three bays of the playhouse were arranged almost straight along Maiden Lane, an idea based on faulty measurements (see 4.3).