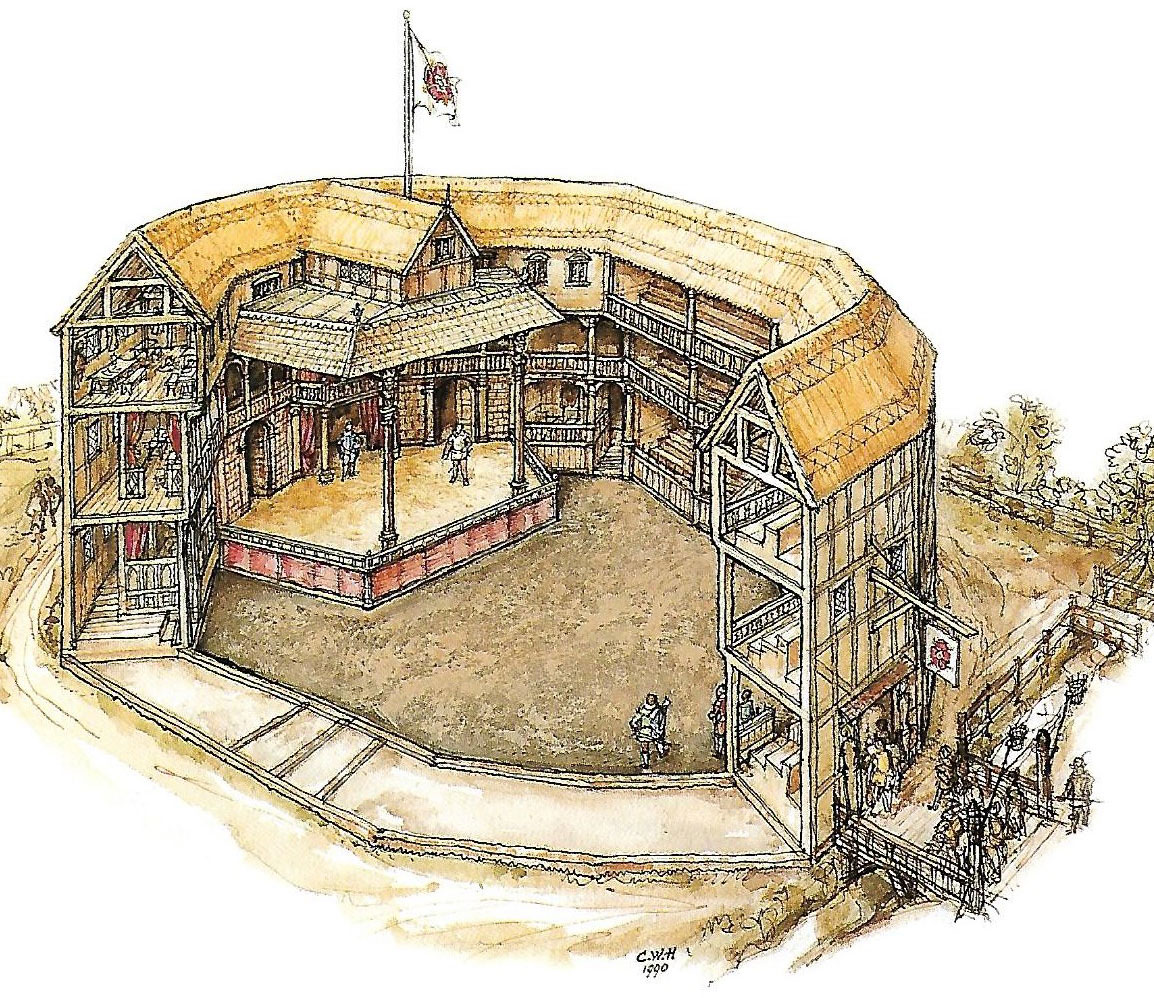 Charles Walter Hodges’ depiction of the Phase II playhouse, depicting a central opening at the back of the stage with curtains

Rhodes provides striking support for a central opening/alcove on the Rose stage: ‘In Look about You, a “Hermit’s cell” or “cave” is located between flanking doors. Gloster enters from the cell at the beginning of the scene and Slink enters at another door fleeing from John and Faukenbridge. Slink sees Gloster near the cell and therefore cannot take refuge in that place; so he must exit through a third door because it would not be logical for him to turn back in the direction from which he is fleeing.’339

Several other plays thought to have been written for the post-1591/2 Rose playhouse stage request that a discovery space, enclosed by curtains, be used to reveal objects or people:340

In Old Fortunatus, a curtain is drawn to discover the casket in which a wishing hat is kept; later an episode is played in and before a discovery space: ‘Musicke sounding still: A curtaine being drawne, where Andelocia lies sleeping in Agripine’s lap….’ 341

In The Downfall of Robert Earl of Huntington, a direction for a dumb show gives: ‘they infold each other, and sit downe within the curteines, Warman with Prior, sir Hugh Lacy, Lord Sentloe & sir Gilbert Broghton folde hands, and drawing the curteins, all (but the Prior) enter and are kindely received by Robin Hoode. The curteins are againe shut’; later, ‘Curtaines open, Robin Hoode sleeps on a greene banke, and Marian is strewing flowers on him.’343

In the first scene of The Death of Robert Earl of Huntington, the Friar says: ‘Draw but that veil, / And there king John sits sleeping in his chaire. Drawe the curten, the king sits sleeping, his sworde by his side.’ 344

In more examples from plays believed to be written for or staged at the post-1591 Rose, stage directions include:

In the Phase II model, the opening is flanked by pillars which are decorative rather than structural (no pillar bases were found in the excavation of the Phase II surface under the stage), which allows for curtains to run behind them forming a discovery space that is in part projected into the stage space, which sits under a cantilevered second-level balcony. The curtains are black, as if to signal a tragedy is to be performed (see 4.11.1). Black curtains would have been befitting for the tragedy of Doctor Faustus, performed at the Rose in 1594, when the Chorus pulls back the curtains to reveal Faustus in his study .345