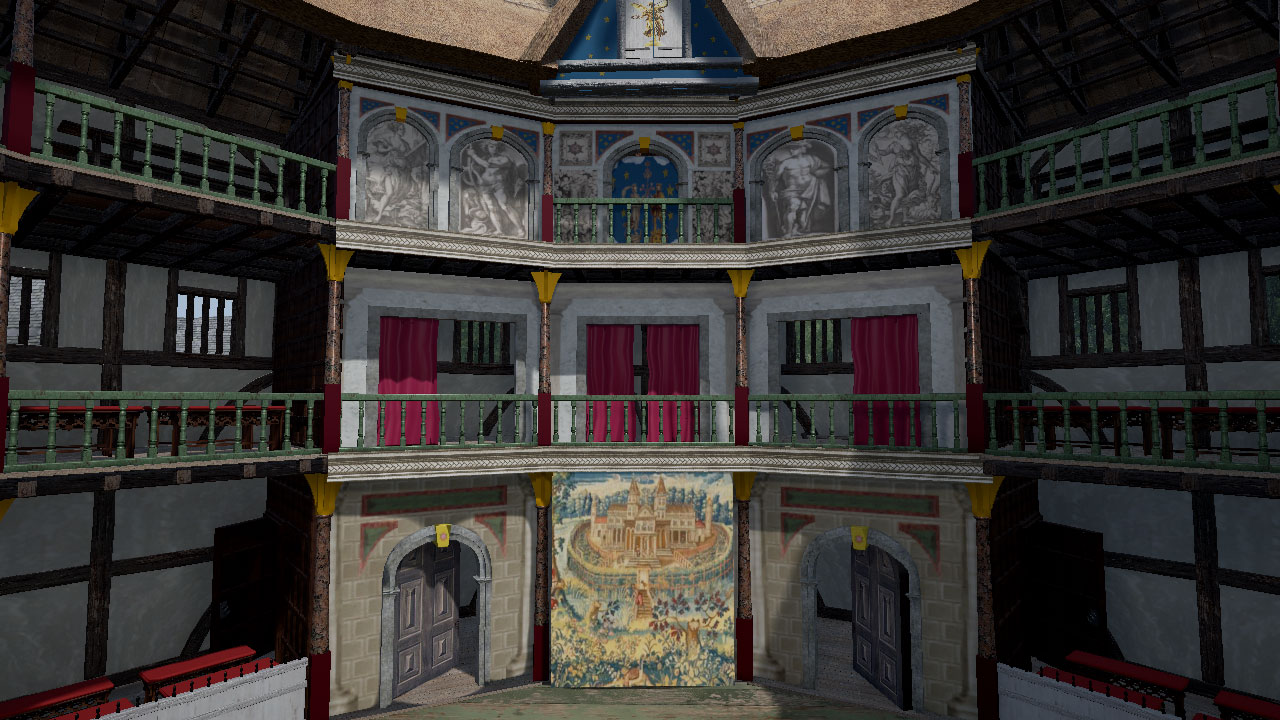 Bowsher and Miller suggest that wooden debris, which appears to be a piece of panelling or wainscoting (fig. 55a), may have been connected to the dismantling of the Phase I stage and, therefore, might have formed part of the decoration of the frons scenae or outward facing wall of the tiring-house.159 In his contract for the Fortune playhouse (fig. 16 [4.2.2]) , Henslowe states that the carpenter, Peter Street, ‘shall not be chardged w[i]th … Rendringe the walls w[i]thin Nor seelinge anie more or other rooms then the gentlemens rooms[,] Twoe pennie rooms and stadge,’160 where ‘sealing’ may refer to the addition of wood panelling.

In the model, wood panelling has been used on the dividing wall separating the galleries from the tiring house. (Such decoration might have suited the walls of ‘Gentlemen’s’ or ‘Lords room,’ which is how it has been used in the model of the later Phase II Rose.)

Bowsher explains that from the archaeology ‘[t]here was very limited evidence for any decoration or internal fixing. The wooden fragments we conjectured to be wainscoting bore no trace of pigment.’161 In contracts, documentary evidence suggests that London’s playhouses, like internal decoration more generally, were elaborately decorated.

In a sermon at Paul’s Cross, given on 3 November 1577, Thomas White says of the Theatre playhouse, its neighbour the Curtain playhouse and/or perhaps the playhouse at Newington Butts: ‘beholde the sumptuous Theatre houses, a continuall monument of London’s prodigalitie and folly’ (my emphasis).162 In another sermon, ‘preached at Paules-crosse on Bartholomew day, being 24th August 1578,’ John Stockwood describes the Theatre playhouse as ‘the gorgeous playing-place erected in the fieldes, than to terme it, as they please to haue it called, a Theatre, that is, euen after the maner of the olde heathenish Theatre at Rome’ (my emphasis).163 The OED defines ‘sumptuous’ as ‘Of buildings … Made or produced at great cost; costly and (hence) magnificent in workmanship, construction, decoration, etc.’; and ‘gorgeous’ as ‘Adorned with rich or brilliant colours; sumptuously gay or splendid; showy, magnificent.’

Egan points out that

significantly, for Stockwood the drama is objectionable not only for its thematic content but also because the venues are opulent and therefore decadent … Mid-twentieth century visual impressions of open-air amphitheatres such as the film of Henry V (Olivier 1944) and Irwin Smith’s scale model of The Globe based on John Cranford Adams’s book (Adams 1942) incorporated into a public display at the Folger Library in Washington, reflected theatre historians’ emphasis upon the Tudor vernacular elements in the architecture and decoration, the use of wood and plaster. These impressions tend to understate the European classical influence that prompted the owners to paint the wood to look like marble and the plaster to look like stone…The myth of Tudor theatrical plainness is perpetuated by the set of the recent film Shakespeare in Love, which is nonetheless accurate in other matters.164

Foreign visitors refer to the playhouses as looking like Roman amphitheatres and were impressed by the faux marble interior decoration. Visiting London in 1596, De Witt described ‘four amphitheatres of obvious beauty, which from their diverse signs receive their diverse names,’ the Theatre, Curtain, Rose and Swan. He continues, ‘The two more remarkable of these are situated to the south, on the far side of the Thames, named the Rose and the Swan, from the suspended signs.’ Further still, he notes that ‘Of all the theatres, however, the largest and most distinguished is the one whose sign is a swan (commonly, the Swan theatre).’ He goes on to describe how the stage roof was ‘supported by wooden columns which, on account of the colour of marble painted on them, can deceive even the most acute, whose form, at least, since it [the playhouse] seems to represent the general notion of Roman work.’ His accompanying sketch (fig. 26 [4.4.1]), with its entasis (curved columns), ornate bases and capitals, suggests classical and Continental influence in the design of the interior.165 Whilst in De Witt’s opinion the Rose was somewhat less ‘distinguished,’ these same influences may also have been drawn on in its interior decoration and to surmise that the marbling was the preserve of the later Swan is to overlook the fact that painting effects employed to transform wood into more expensive stone and marble was popular in Tudor interior decoration.

Henslowe’s later Fortune contract stipulates that its pillars should be ‘wroughte plasterwise [i.e., strapwork pilasters], w[i]th carved proporc[i]ons [i.e., figures] Called Satiers [satyrs] to be placed & set on the Topp of every of the same postes.’166

Evidence from the period suggests that Elizabethan architectural surfaces tended to be polychrome where possible, and reflected a love of decoration, bright colours, and effects.167 Ronayne explains that ‘Like Elizabeth’s elaborate costumes, portraits and pageants, Early Modern buildings often made symbolic statements and were expected to be “read”.’168

In discussing the possible decoration of the Globe playhouse (both the old and the proposal for Sam Wannamaker’s reconstruction), he suggests that:

[It probably] lies between the English tradition of the ornamented façade, low relief decorating flat surfaces, and the innovation of classical sculptural principles … in contrast with the plainly rendered exterior the interior must have been lavishly colourfully decorated … exemplified in miniature form in the carved cabinets popular in the 16th and 17th centuries. They are plain on the outside but when opened they reveal a colourful and sparkling interior … [involving a] framework of classical components, with the anglicising components of flat, cut-out appearance including real or painted columns and pilasters … [and] should be enriched with lively decoration from sources such as Hans Blum, John Shute and Vredeman de Vries. The frons scenae should be the centrepiece appropriate to a house of fantasy, imagination and illusion.169

Flemish Mannerism was a North-European mutation and mélange of Flamboyant Gothic, High Renaissance Italian Mannerist, and French Renaissance Fontainebleau styles.170 The style was disseminated in pattern-books by Dietterlin, de Vries, and others, notably in England.

Hall screens may have acted as inspiration for the design of playhouse frons scenae, which usually bore carved wooden decoration that follows the form and rustications appropriate to stone, and provide evidence for the way that Elizabethan woodwork imitated masonry forms.171 It’s worth noting, however, that at the Rose the stage wall appears to have followed the polygonal line of the main frame, which, Gurr and Orrell suggest, ‘calls into question the widely accepted theory that the Elizabethan tiring house front was derived from planar design of the Tudor hall screen,’ although it isn’t necessarily the case that simply angling the back wall should preclude the general influence of the hall screen.172

Ronayne argues that the wooden and plaster structure of the playhouses would have been painted to look like stone. Stone would have been hierarchal depending on its perceived value—stone, marble and hardstones, semi-precious stones, gilding and jewels—since ‘[s]tone implies cost, substance and permanence, the very qualities that festive structures lacked. It was for the painter to put these qualities back into the wood, plaster and canvas forms.’173

Features that might be expected on a frons scenae include ashlar stone work, marble columns, grotesques, obelisks, flags, cartouches and strapwork, satyrs carved in relief, herms and terms, mythical figures, and pictures painted onto them. 174

The frons scenae would likely have been either carved or flat painted to give the illusion of sculpted stone figures, niches and images, treated in grisaille or trompe l’oeil. Such images were propagated from Continental engravings, for example those by Virgil Solis of Nuremberg and de Vos, depicting classical imagery of gods.175

The frons scenae is the playhouse’s visual focus. It is considered appropriate to set out the order of symbolic imagery as an iconographical arrangement intended to be ‘read.’ These visual planes are arranged as symbolic divisions of the levels in which every figure has a name and a role based in Renaissance and classical thinking, from the earthly plane (Level 1, the stage) up to the heavens (which, for Phase I, in the absence of a stage cover, appears on the walls at Level 3 and upon the gable).176

[159] Bowsher and Miller, The Rose and the Globe, 48. Frons scenae is term first used by Vitruvius to describe the building behind the stage of a theatre, which at the Rose incorporated the tiring house.

[174] For example, the Kederminster Pew; the painted Library Chamber at the church of Langley Marsh near Slough (c. 1620s); Francis Reader, ‘Tudor Domestic Wall Paintings: Part I,’ in Archaeological Journal, no. 92 (1936), 243–86; Renaissance ceiling paintings at Culross Palace, Scotland, adapted from Geffrey Whitney’s A Choice of Emblems (Leyden, 1586), STC 2nd 25438; and the triumphal arches by Stephen Harrison, proposed in 1603 for the entry of James I to London in The Arch’s of Triumph Erected in Honor of the High and Mighty Prince James (London, 1604), STC 2nd 12863.